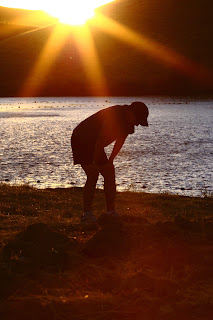 However, take solace.  There is something magnanimous about defeats. It is not all about loss; for God loves losers as much as victors. So, to my dear readers, even when both praying and running are hard to do now, I will keep moving on with hope. In due time, I will be able to fully appreciate God's special gift to me.
Posted by Praying Runner at 10:14 PM 2 comments: